Columnist and language expert Ben Yagoda resorted to all caps in a brief Twitter exchange on the difference (if any) between “since” and “because.”

“There is NEVER confusion,” he said several weeks ago during a chat sponsored by the American Copy Editors Society.

That was in response to my assertion that “because” remains safer than “since” where there may be confusion with a time element.

I tell my copy editing students to beware of absolutes in writing. Absolutes in all caps are especially risky. Yagoda offers a defense of his position in the Lingua Franca column in the Chronicle of Higher Education. 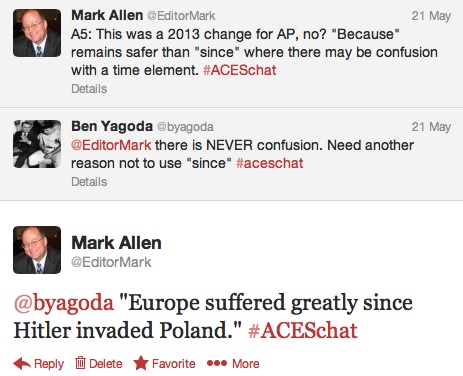 Copy editors, despite their best intentions, can come across as stuffy and pedantic because we sometimes perpetuate standards of English usage that may differ from the way people casually speak and write. “Because” vs. “since” provides a fair example. In the wild, “since” is used for “because” with aplomb and very few bar fights can be attributed to disputes over this usage. The distinction between “since” for time and “since” for cause is not something to fear, but I do think it is something to consider.

Sometimes in the debate between what is a real rule and what is a made-up rule (tricky, as there is no rulebook), we overlook the reality that “rule” can sometimes be shorthand for “good writing.”

END_OF_DOCUMENT_TOKEN_TO_BE_REPLACED

Writing, editing and design by a 20-year newspaper professional

In an age of instant communication, the proper message remains key. I have been a newspaper reporter and editor, writing or improving thousands of articles. As a journalist, I understand the importance of getting it right the first time.

I am available for any project in which printed materials need to be clear and accurate.

If you have a question, send me an e-mail or a tweet. Think of me as your on-staff editor for quick answers to brief questions.